At his 54`s George Clooney has matured. Or this is what his friends say after hearing the news that the actor is selling his house on the paradise beaches of Cabo San Lucas . “When George was single and had a wild lifestyle, it was making a sense to own a big house for parties; but now that he’s married to Amal, those days are long gone, “said a friend of the actor to the American television program Entertainment Tonight.

But Clooney, who for years has enjoyed the weather and the incredible views of theLos Cabos coast, has a plan to not leave the Paradise, he will be guest of his friends Rande Gerber and Cindy Crawford. The couple and actor known for over 20 years. In fact, Clooney’s house is part of a joint project with Gerber, who in 2009 commissioned the Mexican architect Ricardo Legorreta. The villa with sea view consists of two houses with seven bedrooms and 10 bathrooms, each one with huge panoramic swimming pool, theaters and luxurious rooms. The former model and her husband have always lived with Clooney while on vacation in Cabo, so this agreement is no surprise. The group named the two villas as Casamigos, the same name given to their brand of tequila. The actor could get home by up to 46 million dollars and will continue enjoying the sun and surf of Cabo beside his wife, the British lawyer Amal Clooney. 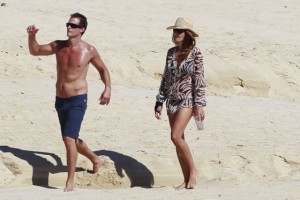 Los Cabos has been for years a magnet for celebrities looking for some privacy during their holidays. Cindy Crawford tired of staying in hotels, encouraged her husband and Clooney to buy a home with sea views. “We had to book a hotel a year in advance and once we reached the site sometimes did not meet our expectations,” said the model in 2013 to the magazine Architectural Digest. But this tourist destination located in the tip of the Baja California peninsula continues to host many celebrities who have not yet bought a villa. Their preferred sites are the Esperanza Resort and Las Ventanas al Paraiso. High waves and 350 days of sunshine a year attract famous actors like Leonardo Di Caprio, Lea Michelle Kaley or Couco and tennis player Ryan Sweeting.

The proximity to Los Angeles allows many of them to take a break here, and to dive into the Sea of ​​Cortez  observing its abundant marine fauna. Still others have chosen it as the place to marry for its spectacular sunsets. Last year the singer of Maroon 5, Adam Levine, celebrated his marriage with Victoria’s Secret model Behati Prinsloo here in Cabo.

After the hurricane Odile struck entire peninsula of Baja California in 2014, many of the stars joined a campaign to encourage tourism in the region. Reese Witherspoon, Nick Jonas and Mario Lopez landmarks recreated in photographs of Los Cabos and rose to their Instagram accounts for millions of followers to consider a holiday here and maybe meet some of the Hollywood celebrities.