Cabo San Lucas, Baja Califonia Sur.- On board of his luxurious and opulent yacht valued at 200 million dollars, the billionaire businessman originally from Australia, James Packer, was discovered while touring the emblematic Cabo San Lucas bay, accompanied by several friends and collaborators close to him and his empire of international companies.
“Back in business,” say service providers at the Cabo San Lucas port, watching the imposing mega-yacht cross the southern Californian sea, announcing its arrival.
According to the versions of the tourist workers of the region, the foreign magnate, looked very relaxed, when he peeked from the deck of the yacht to the outside, releasing light smiles in the air.

According to images taken by a paparazzi team for international media, the 52-year-old playboy looked casually dressed, wearing a navy polo shirt and dark pants, when he went out inside the boat and was looking at a distance the warm destiny of Cabo San Lucas from the ocean, during his morning boat ride.
In the midst of the mitigation stage of the new Coronavirus in Baja California Sur, James Packer decided to fly to Los Cabos, after months of social confinement, only to enjoy a few summer days in Baja Sur. 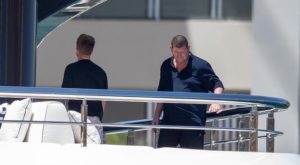 The  new casino owned by him, called simply “Crown” is  installed in the city of Sydney and the  other casino, named “The Harbor City: The Star”, signed an agreement with the Government of the country of Wales, to obtain the exclusive rights of operation of the income spinning mills for the next 21 years.

The Crown Firm, which operates Melbourne and London, England casinos, originally intended that its Sydney operation be largely targeting at seeking the international VIP sector.
In the second half of 2020, construction of the new Crown casino in the Barangaroo community, a small suburb in Sydney’s city center, will be completed, where the $ 2 billion gaming building is slated to open its doors in the month of February 2021.